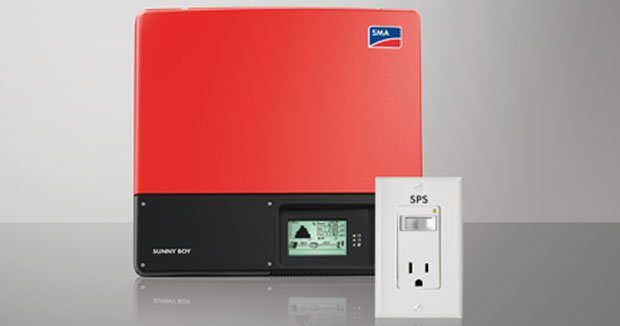 World Of Renewables Network – SMA is the first inverter manufacturer to complete functional and safety testing with UL according to the UL 1741 SA (Supplement A) draft standard, which identifies inverter functions required for optimal grid stability. To achieve that, SMA enhanced the smart-inverter capabilities of its popular Sunny Boy TL-US series of inverters with Secure Power Supply to help maintain voltage, frequency and general grid health. While the new grid support functionality is optional as defined in the UL 1741 SA, it will become mandatory for all new California interactive inverter installations 12 months after the publication of UL 1741 SA.

These capabilities were developed to meet the critical grid support needs of the Arizona Public Service (APS) Solar Partner Program, a rooftop solar initiative designed to generate up to 10 MW of PV-generated power. APS, Arizona’s largest and longest-serving electric company, will own, operate and receive energy from 1,500 PV systems, installed and maintained free of charge to their customers. APS needed to be able to collect data that will help the company better understand and manage the energy flowing into neighborhoods across the state in order to achieve a more reliable and sustainable grid, while providing for greater customer technology choice. The smart-inverter technology developed by SMA will allow the utility to operate the solar installations as they would a power plant, ramping up or curtailing power and other control features based on the real-time needs of the grid. APS is the first utility in the nation to deploy and control this advanced technology remotely.

“Brownouts or blackouts have demonstrated the far-reaching impacts of utility grid instabilities,” said Jeff Smidt, vice president and general manager, UL Energy and Power Technologies division. “We are pleased to see manufacturers like SMA America proactively meeting the needs of a modern utility grid by developing grid-supported, utility-interactive inverters. SMA America’s Sunny Boy TL-US series of inverters not only meets the safety requirements of UL 1741, but also complies with the draft specifications of UL 1741 SA for Grid Support Utility Interactive Inverters that support a more stable utility grid for the future. While Supplement A is still being finalized, by taking the lead and certifying to UL 1741 SA now, SMA America can accelerate their products to market.”

In addition to the features that were tested by UL, SMA also developed a special process for making real-time firmware and parameter changes over cellular networks, enabling APS greater control over the systems in its Solar Partner Program.

“SMA believes achieving compliance with the expected revisions to UL 1741 demonstrates our eagerness to work with industry stakeholders to ensure solar power can continue to grow responsibly on the grid,” said Marko Wittich, SMA executive vice president of sales for the Americas region. “This new technology will allow other utilities in the U.S. to develop similar utility-directed or utility-owned residential solar programs, with an inverter that is already customer-tested and UL-validated.”

About SMA
The SMA Group with sales of €1 billion in 2015 is the global market leader for solar inverters, a key component of all PV plants, and offers innovative key technologies for future power supply structures. It is headquartered in Niestetal, near Kassel, Germany, and is represented in 20 countries. The Group employs more than 3,000 people worldwide. SMA has an extensive range of products, which offers the right inverters for all module types and plant sizes; for small residential systems as well as large-scale plants, grid-connected photovoltaic systems as well as off-grid and hybrid systems. Moreover, SMA offers system technology for various battery technologies and system sizes and collaborates with renowned battery manufacturers and companies from the automotive industry. The SMA technology is protected by about 700 patents and utility models worldwide. The range of services is supplemented by comprehensive services and operational management of large-scale PV power plants. Since 2008, the Group’s parent company, SMA Solar Technology AG, has been listed on the Prime Standard of the Frankfurt Stock Exchange (S92) and is currently the only company in the solar industry that is listed in the TecDAX index. www.SMA-America.com

Disclaimer:
This press release serves only as information and does not constitute an offer or invitation to subscribe for, acquire, hold or sell any securities of SMA Solar Technology AG (the “Company”) or any present or future subsidiary of the Company (together with the Company, the “SMA Group”) nor should it form the basis of, or be relied upon in connection with, any contract to purchase or subscribe for any securities in the Company or any member of the SMA Group or commitment whatsoever. Securities may not be offered or sold in the United States of America absent registration or an exemption from registration under the U.S. Securities Act of 1933, as amended.