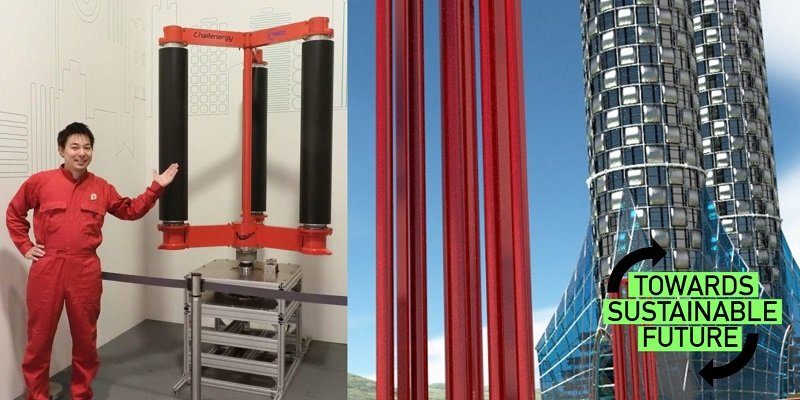 Storms and typhoons are often regarded as nothing more than disasters. They take away lives and destroy property everywhere they go. With the invention of the world’s first typhoon wind turbine, this perception is perhaps about to change. Atsushi Shimizu, an engineer from Japan, has invented the technology that harnesses the immense energy of storms as a unique renewable energy source. According to Atsushi, the energy generated from just one typhoon is more than enough to power Japan for almost 50 years.

During the devastating earthquake and tsunami that hit the island nation in 2011 and killed 19,000, Japan faced the fear of massive nuclear contamination. After three nuclear meltdowns, today Japan imports about 84 percent of its energy requirements and has gradually started a nuclear phase out.

Japan has long struggled to find a renewable alternative. These however, lacked an ingenious approach. “For decades, Japan has brought in European-style wind turbines, not designed for typhoon zones, and installed them with no careful consideration — they’ve broken almost entirely,” Atsushi told CNN.

Atsushi quit his job in 2013, started a green tech firm called Challenergy, and started building a wind turbine that is unbreakable by typhoons. After some fundamental changes to the traditional approach, he and his team of engineers have successfully found a way to harness the energy produced by storms and typhoons, which his country suffers from as an annual ritual.

Despite the fact that storms are looked at as agents of destruction, according to the Atlantic Oceanographic & Meteorological Laboratory, a mature typhoon produces energy equivalent to about half the worldwide electrical generating capacity.