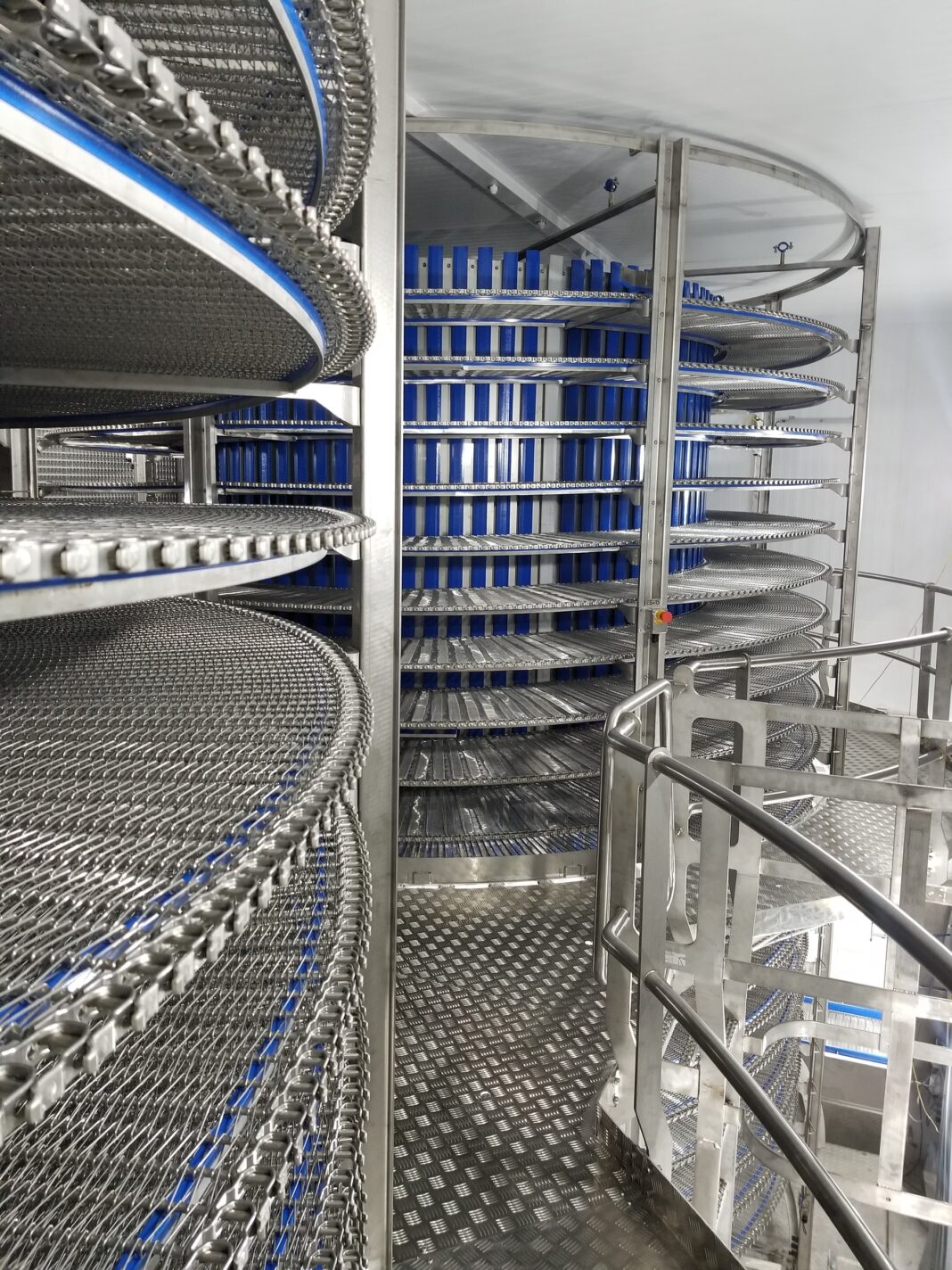 A £4.5 million low carbon refrigeration system that will enable an ice cream brand to cut energy use by up to 80% has taken a significant step forward towards completion.

Mackie’s of Scotland has installed a six metre tall, double drum spiral freezer. The new freezer can chill more ice cream more quickly, which will further improve the quality and texture of the product.

The two spiral drums – which stretch five metres in diameter – are part of a £4.5 million low carbon refrigeration system which will increase ice cream productivity on the Aberdeenshire farm.

It comes after the completion of the plant room which saw successful test runs of its four new ammonia compressors last month as the family-run business aims to become the greenest company in Britain.

Project Manager, Yzanne Turbett, said: “The installation of the spiral freezer marks a major milestone in this project. In our early planning phase we had no inclination of the problems which the country would face last year and the building work was indeed delayed at the start of the first lockdown.

“Despite these ongoing challenges we have managed to finish our plant room which contains the core of the new refrigeration system that will be fully operational later this year.

“This is a much more complex project than Mackie’s has ever taken on before, with so many different aspects to the build and new technology to be implemented.

The freshly filled, ice cream tubs will enter the new spiral freezer at the base of one drum, spiral up to the top, pass to the top of the second drum and spiral down to the bottom of the second drum and the outlet. The new freezer can reduce the temperature of the ice cream, at the rate of almost 7000 litres of ice cream per hour, from -4 °C to -18 °C. The rapid cooling in the freezer has benefits for both the texture and consistency of the finished product.

Installation of a new biomass system in the next phase for the construction project as the system will eventually use biomass heat in the ammonia based refrigeration plant.

The first of its kind in Scotland, the entire project, due to be finally completed by Autumn this year, is targeting ambitious CO2 savings of up to 80% and energy costs of 70-80%. It is this and the innovative combination of proven technology, which will create an exemplar facility for the Scottish food industry, and successfully qualified the project for support of a £2.05 million grant from the Scottish Government’s Low Carbon Infrastructure Transition Programme.

The Scottish Government support, part-funded by the 2014-2020 European Regional Development Fund programme, will be matched by investment of more than £2.5 million by Mackie’s.

Mackie’s already produces more than 10 million litres of ice cream every year. Its renewable energy is derived from a mix of wind, solar and biomass energy that produce over 8.5 MWh of electricity each year.

Mackie’s describe how they make ice cream as “Sky to Scoop”, reflecting on their use of renewable energy and also how they make everything they can on site – the Sun and Wind provides the energy to power the business and to grow crops to feed the cows who provide the fresh milk and cream to make the ice cream.

Mackie’s mission statement includes the desire ‘to be the greenest company in Britain’.

The company is already Climate Positive, producing ice cream with over 60% renewable energy generated by its own wind turbines and solar panels. Mackie’s export 4.5 times as much energy to the grid as they use from the grid.

Solar power: Solar energy complements the wind turbines as the winds are lighter in the summer months when the sun is shining.  The company also has a large solar farm with 1.8MW ground mounted installation in a field, and which was Scotland’s largest solar farm when commissioned in November 2015.  A further 174KW of solar panels are on the roof of the cowshed and chocolate factory – this powers the cowshed and the milking robots, replacing their use of grid energy. Total solar is 1.974 MW capacity.

Biomass: In 2015 Mackie’s installed two Froeling 200kW biomass boilers to replace oil fired heating boilers in the office and in staff housing. This burns sustainable and locally sourced wood chip to produce heating and hot water to eight farm cottages and the main office and removes the need to burn heating oil.

Mackie’s is a 4th generation family who have been farming at Westertown farm in Aberdeenshire since 1912.  Ice cream was a progression from their milk retail business in 1986 and the company now use the fresh whole milk from their own dairy herd to make Mackie’s  real dairy ice cream.

Mackie’s ice cream is available in all major supermarkets across the UK and is exported worldwide with sales of over £2m in Asia.

Mackie’s of Scotland has become one of Scotland’s iconic brands –listed in the top 10 Scottish Food & Drink brands in Scotland. Mackie’s ice cream is no.1 in Scotland and  firmly established as one of the top 5 of UK’s most popular take-home ice creams.

In 2009 Mackie’s diversified in a joint venture with Taylor family in Perthshire to make crisps – now available in over 25 countries.

In 2014 the company diversified again to create a chocolate factory on the farm – the range is available in Scottish supermarkets & will be available direct from Mackie’s new website.

The farm is where the company also make ice, their own packaging, ingredients like honeycomb and sauces and they have 330 milking cows to provide the main ingredient of fresh whole milk.

Mackie’s is a fourth generation family business now run by siblings Mac Mackie, Managing Director with his sisters Karin Mackie/Hayhow, Marketing Director and Kirstin Mackie/Mcnutt, Development Director along with a  staff team of up to 90- including many other family groups working together in the business.

15 January 2021: With reference to the release on 6 November 2020, Bagnall Energy Limited (“Bagnall”) today announces that it has signed a share...
Read more
Featured News