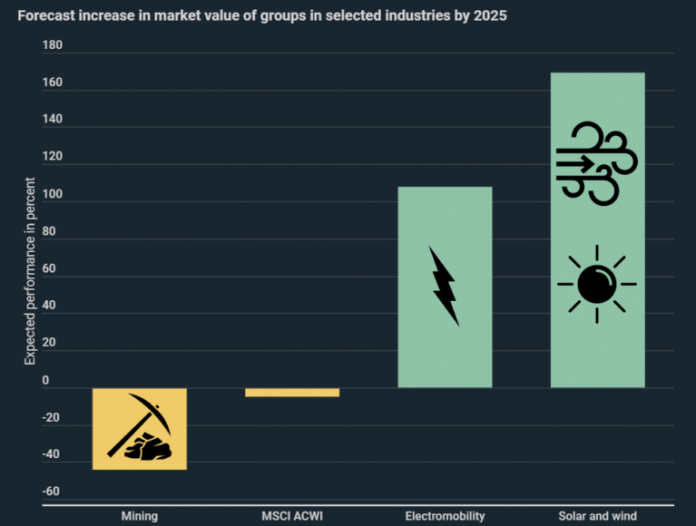 By 2025, publicly traded companies from the solar and wind energy sectors could boast share price gains of up to 169%. This emerges from the findings of a new infographic from Kryptoszene.de. According to the results of the study, this could even be the biggest growth industry.  In contrast to the renewable energy sector, the value of the international stock index MSCI World ACWI is set to fall by up to 4.5%.

According to the authors of the study, the field of electromobility could be the second greatest beneficiary. Experts are predicting share price gains of up to 108% by 2025 for leading companies in this field.

In the future, policymakers are likely to intervene more substantially to promote climate protection, while the risk of climate change still appears undervalued on the stock exchange floor.

As can be seen in the infographic, a majority of German citizens also believe in the potential of renewable energies. 59% of the population favour solar energy, while only 4% approve of coal-based electricity. 8 out of 10 of those surveyed also stated that they expect wind and solar energy to grow in importance in the years to come.

“An evaluation of Google search queries reveals a growing interest in listed companies from the wind and solar sectors,” notes cryptoscene analyst Raphael Lulay. “It remains to be seen whether the price gains live up to this – though all the signs are pointing towards a longer-lasting growth trend”.

The full story with the infographic, facts and more statistics: