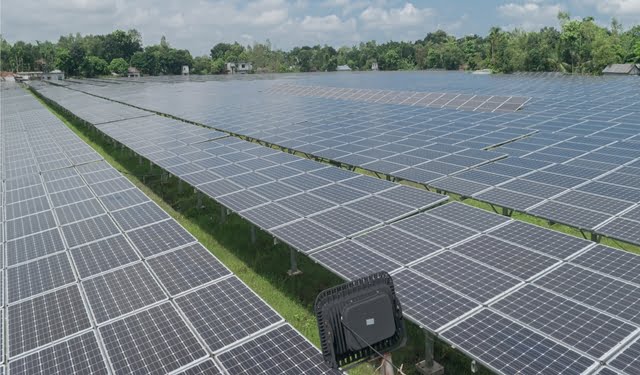 DTEK Kyiv Grids has connected Ukraine’s largest commercial rooftop solar power system to the grid. The solar project, located in the neighborhood of Troyeshchyna, is the first of its kind in Kyiv. It consists of 1,200 solar panels mounted to the roof of a residential building, and covers an area of over 4’000 square meters with an output of 330 kW.

Avrora Term, a Ukrainian company, backed the development of this facility, investing over USD 330’000 in its construction. The project was completed in approximately two years.

“DTEK has already made significant contributions to Ukraine’s energy transition. The construction of the Troyeshchina rooftop solar system is the latest example of our endeavours to integrate electricity from solar power plants into the grid. Since the beginning of 2020, we have connected 49 solar power plants with a capacity of 340 MW across five regions in the country – the equivalent power consumption of the city of Dnipro’s 990’000 inhabitants. We plan to connect an additional number of 26 solar power plants with a capacity of 226 MW by the end of the year. Our commitment to the EU’s Green Deal is clearly evidenced in our promotion of green generation,” says Ivan Geliukh, DTEK Grids CEO.

Fitting ‘green’ generating facilities adjacent to or on top of residential buildings is an important element of the EU’s strategy for the development of the energy system. Through such actions, the EU will be able to restructure its energy sector in order to minimize the sector’s negative impact on the environment.

Mr. Ivko further stated, that going forward, it is hoped that owners of high-rise buildings become fully-fledged co-investors of rooftop solar projects in Kyiv. According to the plan, not only would they receive rent payments for leasing their roofs, but they would also become co-owners of the plants and receive passive income from the generated KWHs of electricity.

DTEK Kyiv Grids CEO Mr. Geliukh added: “For our part, DTEK Kyiv Grids is ready to continue to connect these solar power systems to the grid as quickly as possible. Their availability creates additional power sources and improves the reliability of power supply in Kyiv.”