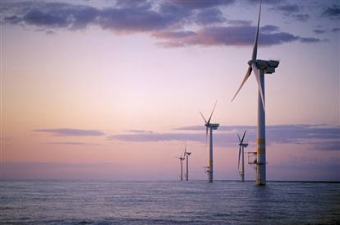 In a bid to increase the use of renewable energy sources, the government is waking up to the value of windfarms. Richard Wood investigates the implications for the future of Britain’s power

In a sign of the changing times, Gordon Brown addressed the annual British Wind Energy Association (BWEA) conference via video message last week. He was supported by both Boris Johnson and the Minister Of State For Energy, Mike O’Brien MP, who both attended the event. In a united front, their addresses focused on the importance of wind energy to the future of the British energy market. The positive effects of planned increases in onshore and offshore wind power generation was emphasised, and a twelve-year action plan laid out.

In June of this year, the Government launched a new renewable energy consultation in an effort to meet their target of generating 15% of the country’s electricity from renewable sources by 2020. It was further pledged that one third of all electricity in the UK should be generated by wind power by that date.

At the July BWEA Cymru conference, Jane Davidson (Minister for the Environment, Sustainability and Housing) set out her aim to make Wales completely energy self-sufficient by 2030, and emphasised the imoprtance of wind power.

On one hand, these ambitious targets are admirable, and almost make amends for the painfully laissez-faire attitude of the government toward energy policy over the two decades. On the other hand, however, the Observer burst the optimistic bubble on the eve of the conference with an investigation that reveals the impossibility of meeting such targets, with proposed wind farms held up by planning regulations and 13-year waiting lists for National Grid connection. Industry leaders do not believe that their companies can fulfil the targets they have been set, and turbine manufacturers’ order books are full for the next five years. With the restrictions in the UK’s laws holding up installation, developers are likely to focus their efforts on countries that offer tax incentives and less restrictions on turbine placement. The picture suddenly appears less rosy for the future of renewables in the UK.

Germany has already pushed huge subsidies into solar power, and Denmark has increased its proportion of wind-generated energy to over 20%. France has had a tidal barrier in operation for over 30 years, although the majority of its energy is generated in nuclear plants. In stark comparison, the UK generates a pitiful 4% of its energy from renewable sources, and the plan of building replacement nuclear plants hinges on external funding. It’s bad news closer to home, too, as one of the few government subsidies available to homeowners to support renewable energy was allowed to expire two years ago.

In light of the fervour surrounding sustainable energy, it’s important to understand wind power and renewables in general. Many myths and rumours circulate the simple wind turbine. Top Gear presenter James May repeated one commonly-held view on James May’s Big Idea only two weeks ago. He stated that wind turbines only provide a meaningful level of power 25% of the time, but this ‘fact’ has been disproved. On average, a turbine will produce its theoretical maximum output 27% of the time, but will generate power over 80% of the time it is operating for. Even at low power ratings the energy is still useful, and with enough turbines over a wide enough area, the fluctuation in power generation would be no more than the National Grid commonly encounters during current power station downtimes. Other myths include the idea that wind turbines consume more energy during manufacture than they produce over their lifetime. A typical wind turbine will actually deliver 80 times the energy used during construction over its 20-year lifetime, and there is no waste or pollution involved during its operation or cleanup, unlike a coal or nuclear plant.

There are, however, some concrete threats to the sustainable energy dream.

Wind turbines have been proven to cause problems for some birds when sited incorrectly. The RSPB supports the wind energy targets, recognising the greater danger from climate change to outweigh the danger to a small number of birds, but it has objected to the location of certain wind farms. In April this year, planning permission for a 181-turbine farm on the Isle of Lewis in the Outer Hebrides was rejected, based on the perceived ecological damage to the area as a whole. Valuable peat bogs would have been destroyed, a new transport infrastructure involving 160km of new roads would have been needed, and wildlife would have been irreversibly damaged. This illustrates the relevance of planning laws, but also demonstrates the potential pitfalls of fully converting to sustainable energy.

In Wales, the Assembly Government has designated six areas for wind farms. Preferred bidders have been identified and invited to submit proposals, but they are not in any way guaranteed to succeed. Developers must pass a number of required targets, including community consultations, various visual studies, and a comprehensive report of damage to the ecology and landscape. If there is a problem found with even one turbine placement, the entire proposal must be recommenced from scratch. Althouth the problems with the Lewis development have shown the importance of planning regulations, the industry feels that a balance must be found between planners and developers in order to fulfil the targets that they have been set. John Woodruff, chairman of BWEA Cymru, said “The self-sufficiency target is bold and exciting, but we need concrete measures on the ground in order to deliver it. Too many wind farms are stuck in planning for far too long.”

Although the bureaucratic obstacles are currently causing delays, once they are overcome the practical obstacles will be significant. This is where Cardiff’s research and undergraduate students are important. Current engineering students will need to meet the challenge of constructing large wind farms and other renewable systems. Cardiff’s School of Engineering is one of six in the country to be part of the Institute of Engineering and Technology’s elite “Power Academy”, intended to encourage electrical engineering students to consider a career in the power industry. The massive planned increase in renewable energy technology will require new experts in renewable energy, power transmission and distribution systems. In May last year a team of four Cardiff engineering students won the national nPower Energy Challenge, with their solution to the UK’s energy problems beating off competition from many other university teams. The targets set by the Assembly Government also mean that there will be a large jobs market for engineers in this sector in Wales, with many of them coming from Cardiff.

In terms of research, the School also contains the Institute of Advanced Materials and Energy Systems (IAMES). Current research topics include the development of smart grid technology to aid microgeneration efforts, various methods of improving transformer efficiency, development of sensors and fault devices for use in power grids, and transmission systems for large offshore wind farms. There are currently over 40 research students involved in these and further projects, which are funded by a combination of research councils and industry partners. Cardiff’s output in these areas is highly valuable to the industry and academic sectors.

Wind power is not yet the force it needs to be in Britain’s energy supply. The unique challenges presented by the decentralised generation system have yet to be met by government. Targets are hugely ambitious and incredibly difficult to meet. Nevertheless, there is much cause for optimism. The sudden increased attention from Westminster and the Senedd has generated a large change in the industry, and the new targets resemble the policies the UK should be promoting. Cardiff’s students are well placed to take advantage of the change, looking towards new jobs in management and implementation of renewable energy installations. If the current fervour can continue against the restrictive world market conditions and planning regulations, the UK can become a world leader in renewable energy – with Cardiff’s students at its helm.