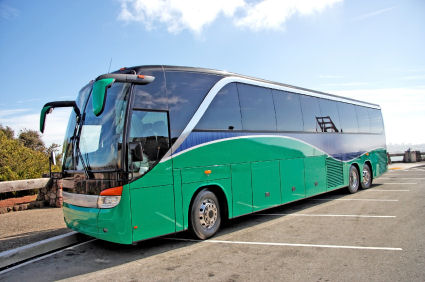 The U.S. DOT announced today that 43 local transit agencies from more than two dozen states would share the $100 million

The big winners in the bid for extra transit stimulus money were Atlanta, Los Angeles, San Antonio, Oakland, and the state of Connecticut, all of which won more than $4 million in federal aid to modernize and upgrade their transit systems.

Atlanta’s metro transit authority will use its $10.8 million grant to erect the state’s largest solar-panel installation, while Los Angeles won $4.5 million for a plan to store and re-utilize the energy produced by braking subway trains.

Today’s show of federal support for transit may be just a prelude, however; Transportation Secretary Ray LaHood is currently evaluating a flood of bids for the stimulus law’s $1.5 billion in competitive TIGER grants, which are open to all modes of transportation. Winners of money from the TIGER program — its full name is Transportation Investments Generating Economic Recovery — could be announced as soon as this fall.

After the jump, check out the full list of the transit agencies that won federal grants, along with their proposed projects, as released today by the U.S. DOT.

California: City of Santa Clarita, $4,620,000. Photovoltaic Modules on Transit Maintenance Facility: Add photovoltaic (PV) modules to the Transit Maintenance Facility (TMF) to generate electricity to offset the electric power consumed at the TMF site. The PV modules will be placed on top of canopies that will generate electricity while providing shade for full-size inter-city and commuter buses.

Colorado: Denver Regional Transportation District (Boulder, headquarters in Denver), $325,000. Heating upgrades at Boulder bus maintenance facility: To improve the heating system at its Boulder bus maintenance facility located in Boulder, CO. This project will replace two old boilers with four new 2.5 MBtu Clearfire condensing boilers with 20-ppm low NOx burners. An updated control system will allow the boilers to be reset based on outdoor air temperatures, will reduce cycling of the boilers, and will serve as a boiler master controller that will stage the boilers based on demand loading.

Connecticut: Connecticut Department of Transportation (statewide) $7,000,000. Stationary Fuel Cells and Hybrid Transit Buses Incremental Costs: The purchase of diesel-electric hybrid transit buses and stationary fuel cells for use in the statewide bus system in Connecticut. This grant would allow ConnDOT to upgrade the upcoming purchases of buses and would fund the incremental cost of a hybrid bus compared to a conventional bus. It would also fund stationary fuel cells to provide primary and emergency back-up power for the bus maintenance and storage facilities.

Illinois: Chicago Transit Authority (Chicago), $1,500,000. North Park Electrification – Electric Power Delivery System for Outdoor Bus Parking: Construct electrified stalls that will deliver electrical power for up to 80 vehicles and provide services such as heating and air-conditioning to vehicles that would otherwise be left idling during overnight cleaning and prior to morning pullout.

Illinois: Rock Island Metro (Rock Island), $600,000. Solar Thermal System: A solar thermal system on the building roof will provide hot water for the operations building and the maintenance building. This is a solar thermal project not based on PV-based solar.

Indiana: Greater Lafayette Public Transportation Corporation (Lafayette), $2,180,000. Wind Energy Project: GLPTC seeks to reduce its electrical energy usage by investing in a renewable source of energy to be generated by wind using equipment on site. The primary use of electrical energy by GLPTC is by its garage and maintenance facilities. The installation of wind turbine units on GLPTC premises is projected to provide a significant amount of the total amount of electrical energy used by CityBus.

Massachusetts: Lowell Regional Transit Authority (Lowell), $1,500,000. Hale Street Solar Photovoltaic system: The installation of a photovoltaic panel array on the roof of the Hale Street garage facility owned by the LRTA. The facility is used by the LRTA to store, fuel, maintain, and repair transportation vehicles (buses, vans, tow trucks etc.) as well as administrative and dispatch services. The facility is a 70,000 square foot building located in an industrial zone in Lowell, Massachusetts.

Maryland: Maryland Transit Administration (statewide), $522,000. Halon 1301 Replacement: The MTA currently has approximately 5 metric tons of Halon 1301 (CBrF3) deployed at 24 MTA facilities in and surrounding Baltimore City. Each metric ton of Halon 1301 released to the atmosphere – intentionally or inadvertently – is equivalent to releasing 6,900 metric tons of carbon dioxide. The scope of this project includes destruction of MTA’s inventory of Halon 1301 and replacement with another clean agent.

New York: New York City Transit Department of Subways (New York City), $2,000,000. Remote 3rd Rail Heaters Monitoring and Control System: Install wireless control points linked to 3rd rail heaters in two phases. The project will allow these 3rd rail heaters to be remotely monitored and turned on and off from a central control location depending on weather conditions, thus minimizing electricity use and eliminating wasted energy. TIGGER will fund the labor portion of the project only. Material is being financed and procured through the New York Power Authority.

Oregon: Lane Transit District (Eugene), $3,000,000. Hybrid Transit Buses Incremental Costs: For the incremental cost of hybrid-electric propulsion on 40-foot replacement buses. The buses to be replaced are diesel propulsion and have been in service since 1994.

The European Investment Bank (EIB)  will provide €65 million and BPI an additional €47 million to EDP Renováveis S.A. (EDPR), one of the main...
Read more