How energy storage can unlock the potential of renewables 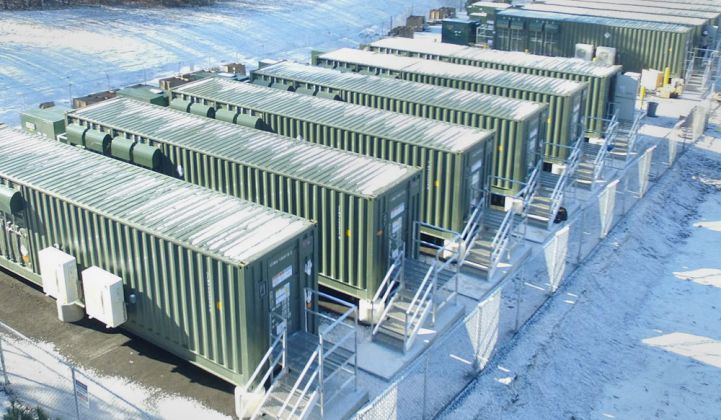 By storing energy we can address the challenge of guaranteeing flexible and reliable supply from weather-dependant energy sources – cutting bills, reducing carbon emissions and delivering on the promise of the energy transition.

Energy generation hit the headlines in May as the UK went two weeks without burning coal for the first time since 1882. The news came just two years after the UK celebrated its first full day without burning fossil fuel.

Such progress has only been possible thanks to the rapid growth of renewable energy sources in the UK. Over the last five years, the UK’s renewable energy capacity has tripled. At the same time, fossil fuel generation capacity has fallen by a third, as power stations have reached the end of their life or become uneconomical.

Today, the UK has the largest off-shore wind capacity on the planet, with solar also gaining in importance. Another record was broken in May this year as over a quarter of the country was powered by the sun on one day.

To further transition to renewable energy sources, however, the UK will need to deploy energy storage.

The National Grid has always faced the challenge of balancing electricity generation with fluctuating demand – from predictable patterns of human activity but also unexpected changes like equipment overloads or storms.

Renewable energy, such as wind or solar, adds to the difficulty as the weather cannot simply be ‘switched on’ when everyone wants to boil water for a cup of tea at half time in the way a power station can be activated to cope with additional demand.

Energy storage can help by acting as an additional supply when demand exceeds generation and saving energy for later when there is too much generation, maintaining the perfect balance.

In the past, it was considered too expensive to deploy on a wide scale, much as in the early

days of wind and solar power. However, new technologies, including batteries, compressed air power, power-to-gas and flywheels, are now making it a viable solution.

Omexom, the VINCI Energies brand dedicated to the generation, transmission and distribution of electricity, has been key in driving the development and implementation of some of these innovations, especially lithium-ion batteries.

Omexom was responsible for the complete low voltage and building bound installations, including mounting the batteries in racks and linking them to transformers, as well as implementing a powerful cooling solution.

The resulting battery storage system can respond to the changing needs of the electricity grid in less than a second and because no fossil fuels are involved it helps meet the Dutch government’s target of achieving 14% of energy consumption from sustainable sources by 2020.

Cheaper energy for all

Network operators are not the only ones who can benefit from energy storage, however. While electricity prices for domestic users are generally fixed throughout the day, large non-domestic users have to pay more during periods of peak demand. So a manufacturing plant, for example, could significantly lower its electricity expenditure by charging an energy storage system at times when energy is cheaper to use and drawing on that power when the cost goes up during peak pricing times.

Homeowners, meanwhile, could also save money by storing energy generated by solar panels on their roofs when they are out during the day for use later on. It would allow them to use more of the energy they produce themselves and purchase less electricity from the grid.

Energy storage currently offers a huge opportunity for network operators to establish themselves as industry leaders in sustainability, as well as for energy users to lower their emissions and energy costs. As battery costs continue to fall, the next decade is likely to see widespread deployment of lithium-ion battery technology for energy storage in factories, offices, homes and vehicles, as a complement to the larger work on storage already being carried out by network operators. When this happens, energy storage will no longer be an opportunity but a necessity as a key component in a flexible and responsible smart grid, powered entirely by renewable energy.

VINCI Energies is a community of incredible people empowered to deliver the promises of the digital and energy revolutions. With their strong regional roots and agile organisational structure, VINCI Energies’ business units boost the reliability, safety and efficiency of energy, transport and communication infrastructure, factories, buildings and information systems.

Organized by “Globally” on behalf of MOCCAE, the Award aims to attract innovations from around the world to the UAE to support the country...
Read more
Editor's Choice