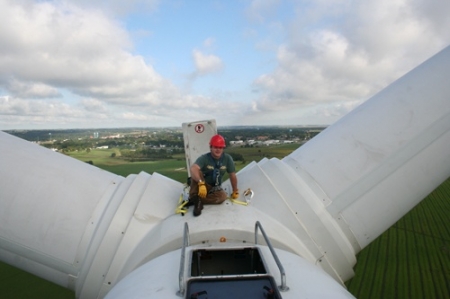 Hull is Leading the Clean Power Revolution, and Other Towns on the South Shore Are Following

When Hull Wind I started spinning in December 2001, the 165-foot wind turbine was a bold addition to the landscape.

But more striking was the effect on the town’s image: Hull became a visionary, a model of what a commitment to cleaner, cheaper energy looks like.

Richard Miller, the town’s operations manager, says he gets four or five calls a week from towns all over the country. “They all want to know how we did it,” he said.

Some of those questions are coming from Hull’s neighbors on the other South Shore, where slowly but surely, a mix of public and private interest is driving investment in wind power.

Since 2004, dozens of communities across the state have dangled a toe in the wind energy water. At last count, there were 25 proposed turbines in 13 towns on the South Shore. Plymouth leads the way, with two town initiatives, one county proposal and four from private companies.

Projects in Quincy, Cohasset, Marshfield, Scituate, and Hanover are likely a year or less away from reality, say their developers. At least three other towns have axed their plans, citing a lack of funding, a lack of political will, or in the case of a proposed turbine at Whitman-Hanson High School, a lack of wind.

Most plans are somewhere in the middle of the bureaucratic timeline of site survey, wind testing, public forums, city council approval, zoning board permits, and negotiations with design and construction firms.

Electricity prices have doubled in the past decade. At the same time, the power-generating ability of turbines has increased.

“Municipalities are realizing that we’ve got to change our act, and that there are better and better ways of powering our towns,” Beaton said.

Gov. Deval Patrick signed the Green Communities Act into law on July 2. It allows owners of wind turbines to sell their surplus electricity back to the power grid.

Towns can also receive credits that they can use to power municipal buildings such as schools, fire and police stations, and town halls. “Investing in wind power is suddenly much more attractive,” said Andrew Brydges, a consultant with KEMA Inc., which has worked on the Kingston turbine plan.

But even with the legislative push, progress is slow. At least a year’s worth of wind-speed data is needed to justify building a turbine. Grant money is available from the state, but town and city officials have to approve the application. Deciding who pays up- front for the turbines – which run between $1 and $4 million, depending on size and capacity – who owns and operates them, and who gets the surplus power can be tricky. And most zoning bylaws, decades old, do not clearly spell out how to handle emerging wind technology.

“There’s a lot legwork and a lot of paperwork involved,” Beaton said. “It’s definitely a process.

And then there’s the job of actually getting the turbine, most of which are built overseas. Several towns reported wait times of eight months to two years.

“It’s to the point where just getting on a waiting list is tough,” said John Birtwell, public information director for the Plymouth County Sheriff’s office, which has plans to build a turbine at the county jail.

But even with the bureaucratic bottleneck and backordered turbines, there’s a stiff wind, and it’s only blowing in one direction.

“We’re only going to see more and more of these projects,” said James Sweeney, whose Plymouth-based energy company, CCI Energy, has contracts to build turbines in Cohasset and Marshfield. “That’s where the legislation is going and that’s where the interest is.”