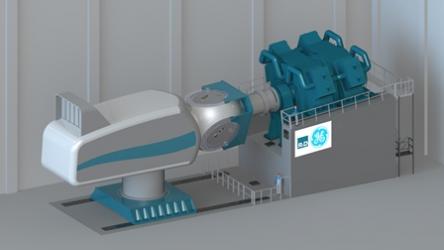 The Lindoe Nacelle Testing project (LNT) will be located in the Lindø Industrial Park on Funen, Denmark’s fourth-largest island.

PARIS—March 14, 2013— GE’s Power Conversion business (NYSE: GE) has signed a turnkey contract with the Lindoe Offshore Renewables Center (LORC), a Danish center for test of renewable energy technology, for the construction, commissioning and handover of one of the world’s most advanced facilities to test wind turbine nacelles with an output power of up to 10 Megawatts (MW). The Lindoe Nacelle Testing project (LNT) will be located in the Lindø Industrial Park on Funen, Denmark’s fourth-largest island. It will be ready for first tests in 2014.

The function tester will incorporate GE’s drivetrain, grid simulation, control systems and foundation work. It is comprised of: medium voltage switch gear, transformers, inverter system DDPM (direct drive permanent magnet) motor, HMI (human-machine interface) and foundation. GE will carry out the installation, commissioning, and remote service for the project. The medium voltage inverter system is a further development of GE’s existing MV7000 series, and is one of the most compact medium voltage inverters on the market. The MV7000 is based on tried-and-tested GE technology using dynamic control properties and low grid interference.

“GE is extremely pleased and proud to be a partner for LORC in building an outstanding test bench that will lead the wind industry into the future of a safer supply of renewable power”, says Franz Hubl, Global Business Leader – Test Systems, at GE Power Conversion. “As a world leader in this field, we have significant experience to contribute.”

The new nacelle tester will enable LORC to test the functionality and performance of wind turbine nacelles by using a specially designed adapter that enables the turbine hub and all field operational software and hardware—including pitch control—to be included in the test. It will open up a wide range of opportunities to test wind turbine controllers inside the nacelle, using highly realistic test conditions at 33kV level, which is unique in the test system business.

“We choose to work with GE because of their extensive knowledge in the wind power industry and their worldwide references for test systems,” says Ove Poulsen, Chief Executive Officer at LORC. “GE also provided us with a technical solution that best fits the requirements for this project. Users will be able to carry out a full range of tests on their equipment without having to adapt their turbine software or hardware. Because the test bench can be connected to a “virtual” wind farm (created by separate system), it will be able to operate as HIL – Hardware in the Loop.”

The test bench has a modular design that will enable it to be adapted to future needs. For example, its grid simulator power can be increased at a later date and thereby increase its functionality to carry out extended FRT (Fault Ride Through) tests – simulations of wind turbine systems to remain connected to the supply during grid malfunctions and to help stabilize it.

LNT will be able to meet the demands for testing of tomorrow’s offshore wind turbines in a facility where national grid codes can be tested in combination with loads caused by rapidly changing wind speed conditions. Electrical malfunctions and turbine protection systems have historically led to unforeseen excessive loadings of mechanical components and thereby reduced expected life-time. At LNT it will be possible to verify the stress levels under numerous different load cases, thereby helping to improve long term reliability.

GE was helped in winning the contract by the fact that it already has worldwide references in test systems for the wind power industry, and that it was able to offer LORC a technical solution that best fits its requirement. It is alone in producing direct drive permanent magnet motors in the double-digit megawatt range suitable for wind turbines, it offers a flexible automation and visualization system, and it owns important intellectual property rights on grid simulation.