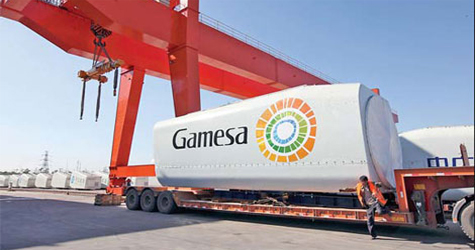 Gamesa, a global technology leader in wind energy, has cemented its presence in China with the opening of its sixth manufacturing plant.

The facility, devoted to the manufacture of control cabinet, is located in Tianjin – the company’s main manufacturing base outside of Europe -, where Gamesa already had four plants and produces the main components of its wind turbines: blades, nacelle assembly, gearboxes and now power electronics.

The new electronics components plant is notable for its technological sophistication and automated assembly lines. Moreover, Gamesa this year opened another nacelle assembly facility in the province of Jilin. Gamesa’s production capacity in China exceeds 1,000 MW.

Last week, Gamesa signed the contract to supply 48 MW for the wind farm that Datang will develop in Liaoning’s province. Gamesa will install a total of 24 G90-2.0 MW turbines in 2012. These MW are added to 1,000 MW of Gamesa’s firm orders for delivery in 2012.

Gamesa will deliver the first 25 units of its G97-2.0 MW turbine in China (a total of 50 MW) to wind farms which Longyuan – the world’s No. 3 wind farm developer- will build in Ningxia Hui province. The contract coincides with the start-up of manufacturing of this turbine model in China, which will be produced in four regions around the world simultaneously and in parallel.

The plant inauguration ceremony, presided over by Gamesa China Chairman and CEO José Antonio Miranda, and Tianjin Deputy Mayor Ren Xuefeng, concluded with a visit to Gamesa’s training centre in the province.

“Gamesa will continue to work with China to develop the wind energy industry,” said José Antonio Miranda. “Tianjin is now our most important international manufacturing base, which we are building on by developing the best technology geared towards helping to improve this industry.”

The training facility allows Gamesa employees to complete their training and enables the company to share experience and know-how in wind energy with its suppliers and customers. More than 100 local customers have attended some of the 12 theoretical courses on wind farms which have been offered at the facility. In addition, encouraged by their attendance at the courses, more than 150 subcontractors have become certified.

3,000 turbines installed in China, and a joint development pipeline of 2,900 MW

Gamesa in China operates as a turbine manufacturer and wind farm developer, a competitive advantage it strengthens through joint ventures with the country’s major power companies (at a global and provincial level), thanks to its comprehensive knowledge of the wind energy industry.

Gamesa has operated in China since 2000, installing close to 3,000 turbines at more than 60 sites across the country.

The company currently has six manufacturing plants in Tianjin and Jilin provinces and employs 1,200 people in China.

By September 2011, China accounted for 21% of the company’s total sales.

With more than 15 years’ experience, Gamesa is a global technological leader in the design, manufacture, installation and maintenance of wind turbines, with more than 23,000 MW installed in over 30 countries and 15,000 MW under maintenance.

The company has 30 production facilities in Europe, the US, China, India and Brazil and 8,000 employees worldwide.

Gamesa is also a world leader in the development, construction and sale of wind farms, having installed over 4,100 MW and having a portfolio of 24,500 MW in Europe, America and Asia.