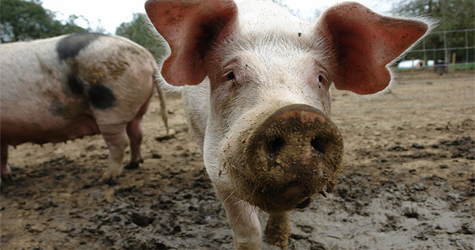 The fast-growing algae will remove the excess nutrients and capture carbon dioxide.

Agriculture is already contributing much to advancing the United States’ energy self-sufficiency; now you can add swine manure and algae to the growing list. University of Illinois has plans for an educational and research facility to demonstrate swine and algae conversion into crude oil.

The facility will be located at the Swine Research Center (SRC) located at the University of Illinois’ South Farms and will be developed in collaboration with the animal science department.

“They have about 3,000 pigs at the SRC, and the manure lagoon is currently discharged to the local sanitary sewer at significant expense,” says Lance Schideman, an agricultural and biological engineering (ABE) professor, a researcher of integrated algae systems for water purification and biomass production. “One immediate benefit for the unit would be a substantial reduction in its sewer bill, but hopefully, the longer term benefit would be value-added co-products from the residuals management system.”

Schideman will team up with Yuanhui Zhang, an ABE professor who has spent nearly a decade researching swine manure conversion into crude oil.

“With this system, we will first convert swine manure into crude oil in a hydrothermal liquefaction (HTL) reactor,” Schideman says. The resulting wastewater contains nutrients, such as nitrogen and phosphorus, which can be used to grow algae. The fast-growing algae will remove the excess nutrients and capture carbon dioxide. The algae will then be fed back to the HTL reactor to be converted into biocrude oil, Schideman explains.

While the researchers have shown that all parts of the process are viable, “we haven’t brought them together in one continuous process, so that’s the main goal of the project,” Schideman notes.

The research theme is Environment-Enhancing Energy, or E² Energy, because it is an effort to meet the energy production challenge in a way that is both economically viable and environmentally sustainable.

“This synergistic process is extremely advantageous,” Zhang says, “because it brings together two rivals, energy production and environmental protection, to complement rather than compete with one another.”

The hope is that he laboratory will become a cutting-edge facility for applied research and education on novel processes that convert agricultural residuals into valuable bioenergy and biochemical resources, with environmental benefits. “Right now we are developing strategic partnerships with stakeholders including producers, equipment manufacturers, academics, Extension specialists and co-product end users, to maximize the impact of this new research and Extension facility,” Schideman says.