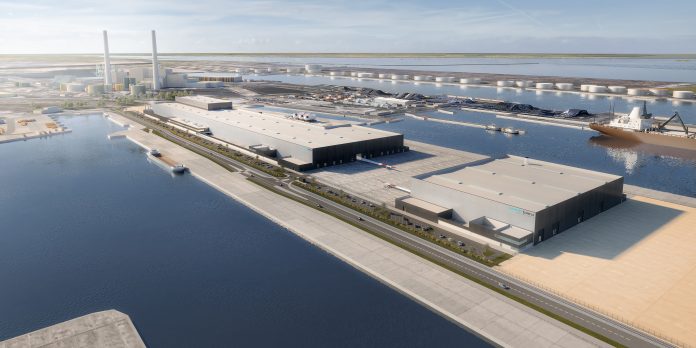 Siemens Gamesa has received the firm order for the supply of wind turbines and a 15-year maintenance contract for the Fécamp offshore wind power plant from customer EDF Renewables, Enbridge and wpd. This 497 MW project located in Normandy will be equipped with 71 SWT-7.0-154 offshore wind turbines, each with capacity of 7 MW. These turbines will be manufactured in the wind turbine plant Siemens Gamesa is to build in Le Havre, France.

The announcement of this firm order comes in addition to the recent firm order from Ailes Marines consortium for the 496 MW Bay of St. Brieuc offshore wind power plant located in Britanny. Here, Siemens Gamesa will supply 62 SG 8.0-167 DD offshore wind turbines and maintain them for 10 years. These machines will also be manufactured in Le Havre.

“These first two firm orders, which is almost 1,000 MW of capacity of the 2,500 MW currently in our French project pipeline, strengthens Siemens Gamesa´s leadership of the French offshore wind industry. This is good news for the renewable energy transition in France, and allows us to fully bring our offshore manufacturing project in Le Havre to life,” says Andreas Nauen, CEO of the Siemens Gamesa Offshore Business Unit.

Cédric Le Bousse, Director of Renewable Marine Energies France of EDF Renewables, commented: “I am delighted to announce today the construction of our offshore wind farm in Fécamp. Thanks to our industrial partner Siemens Gamesa and the mobilization of EDF Renewables’ teams with the local stakeholders for many years, this ambitious project will create value for the territories and the Normandy region.”

The next expected orders for SGRE concern the Courseulles sur mer, Dieppe le Tréport and Yeu Noirmoutier projects for a total of nearly 1500 MW of additional capacity.

Siemens Gamesa selects a consortium led by GTM Normandie-Centre, a subsidiary of VINCI Construction France for the construction of its offshore wind turbine plant in Le Havre

The consortium led by GTM Normandie-Centre, a VINCI Construction France subsidiary, was selected for the construction of the facility to be located on the Quai Joannès Couvert in the Port of Le Havre. The 20-hectare factory will be the first in the world to manufacture all main offshore wind turbine components under one roof as previously announced.

“More than a third of the consortium is made up of local companies that will draw on the know-how of partners and subcontractors from the local and regional economic fabric. The work will use materials produced in Le Havre. With more than 600 000 hours of work, the project will mobilise a total of almost 350 people, with provisions designed to promote local employment.” explained Christophe Quardel, Regional Director of GTM Normandie-Centre.

This offshore wind turbine plant is the largest industrial project in the French renewable energy industry to date and will be used to supply Siemens Gamesa offshore wind projects in France and potentially abroad. Start of operation for the plant is scheduled to take place between the end of 2021 and early 2022.

“It has been a long journey from the award of these projects to the confirmation of the orders received today and is the result of great collaboration with customers and partners, and within our own teams. We can now look ahead to the launch of their construction. We remain fully committed to make this historic industrial plan a symbol of the French Ecological Transition as well as an example of long-term green jobs and new business opportunities for local companies,” declared Filippo Cimitan, Managing Director of Siemens Gamesa France.

The Siemens Gamesa offshore manufacturing plant in Le Havre is expected to create approximately 750 direct and indirect jobs when fully operational, particularly in the fields of composite materials, mechanical assembly, and logistics. Siemens Gamesa is expected to start recruiting at the end of 2020.

“Wind turbines produced in Le Havre to equip the Fécamp wind farm is excellent news for the Le Havre area and for Normandy. I am delighted to see that this major industrial project is progressing well, all the signals are now green to see the first factory in the world to produce blades and nacelles coming out of the ground on our territory. Our unfailing mobilization is bearing fruit and will lead to the creation of 750 direct and indirect jobs in Le Havre.” declared Jean Baptiste Gastinne, Mayor of Le Havre and President of Le Havre Seine Metropolis.

Siemens Gamesa is a global leader in the wind power industry, with a strong presence in all facets of the business: offshore, onshore and services. The company’s advanced digital capabilities enable it to offer one of the broadest product portfolios in the sector as well as industry-leading service solutions, helping to make clean energy more affordable and reliable. With more than 103 GW installed worldwide, Siemens Gamesa manufactures, installs and maintains wind turbines, both onshore and offshore. The company’s orders backlog stands at €28.6 billion. The company is headquartered in Spain and listed on the Spanish stock exchange (trading on the Ibex-35 index).

As of May 2020, Siemens Gamesa has over 3,500 offshore wind turbines in operation globally with a combined capacity of more than 15.5 GW. The company’s experiences reach back as far as 1991, when it established the world’s first offshore wind power plant. Through a strong focus on safety and innovation, SGRE constantly strives to reduce the Levelized Cost of Energy from offshore wind power.

About the consortium led by GTM Normandie –Centre