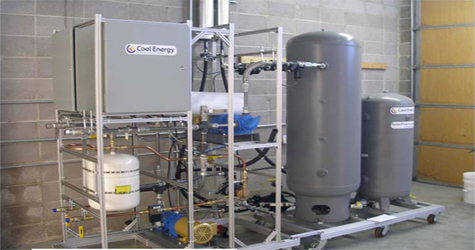 Cool Energy, Inc., a developer of clean energy heat and power generating systems, today announced that it has completed the commissioning of the solar field for its SolarFlow™ System demonstration in Boulder, CO.

BOULDER, CO, This field will be used to provide heat for the commercial building on which it is located in the winter months, and to generate electricity during the rest of the year using the novel SolarHeart Engine® developed by Cool Energy. Organizations that have contributed to the planning, financing, and installation of this state-of-the-art solar thermal field include the National Science Foundation, the Department of Energy and Xcel Energy.

“Xcel Energy is very proud to be involved with the evaluation of the Cool Energy’s advanced solar thermal system,” said Dennis Stephens, the utility’s director of smart grid investments. “The energy industry is particularly interested in providing dispatchable power on demand, especially when energy consumption is high. Cool Energy is developing cost effective solutions for the energy challenges our nation is facing, including advanced power-producing technologies that have minimal environmental impact.”

The SolarFlow System is a combined heat and power (CHP) generation system sized for residential and small commercial buildings that uses solar energy as its only input “fuel.” The system has several novel features, including energy storage and a control system that maximizes customer value by optimally apportioning the system’s energy output between heat and electricity depending on the season and weather conditions (both current and forecasted). Core to the system is Cool Energy’s low-temperature SolarHeart® Engine, a specialized Stirling engine powered electric generator that the system activates whenever the electricity produced is more valuable than the heat consumed. Under laboratory conditions of a temperature differential of 210ºC, the third generation SolarHeart® Engine to be used for this field test recently generated over 2000 watts of electric power, and reached a thermal to electrical conversion efficiency of over 16%, exceeding expectations and further validating Cool Energy’s engine development methodology.

“The completion of this solar field is another important milestone for us,” said Sam Weaver, CEO and President of Cool Energy. “We will be able to demonstrate the performance and financial benefits of our hybrid clean energy approach to homeowners and utilities alike. I want to thank all parties who have helped make this a reality, and want to thank Custom Solar for customizing this system to our needs.”

About Cool Energy, Inc.
Cool Energy is a clean energy technology development company that has developed the SolarHeart® Engine, an innovative and proprietary low temperature Stirling engine for conversion of solar thermal energy and waste heat to electricity. Winner of the 2009 Clean Tech Open regional Sustainability Award, Cool Energy has received grant funding from the National Science Foundation, Department of Energy, and the State of Colorado Governor’s Energy Office. More information is available at www.coolenergyinc.com or by calling (303) 442–2121.