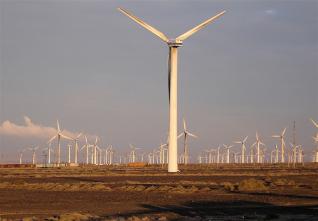 DEVENS, Mass., Feb 01, 2010 (BUSINESS WIRE) — American Superconductor Corporation (NASDAQ: AMSC), a global power technologies company, announced today that it has received an initial order for full wind turbine electrical control systems from China’s Shenyang Blower Works (Group) Co., Ltd. (SBW) that is worth approximately US$70 million. The systems will be deployed in the 2 megawatt (MW) doubly fed induction wind turbines that were co-developed with AMSC Windtec(TM), a wholly owned subsidiary of AMSC. This is the largest initial electrical control system order that AMSC has received to date from any wind turbine customer.

Founded in 1934 and based in Shenyang, China, SBW is a large state-owned enterprise that provides a wide array of industrial equipment including large-scale compressors, blowers, fans, heat exchangers as well as large-scale nuclear power pumps, boiler feed pumps and petrochemical pumps. The company has more than 5,700 employees and approximately US$1.4 billion in annual sales.

SBW plans to erect its first 2 MW wind turbine in March 2010 and will be the fourth AMSC customer to enter volume production of advanced wind turbines in China. AMSC expects to begin shipping the electrical control systems to SBW in the second half of calendar 2010 and complete shipments in the first half of 2013.

“Shenyang Blower Works prides itself on innovation and manufacturing excellence for the wind power sector,” said Su Yongqiang, Shenyang Blower Works president and chief executive officer. “Our partnership with AMSC Windtec has helped us quickly launch a new growth engine for our company. We believe SBW will play a key role in China’s build-out of renewable energy in the decades ahead.”

AMSC Windtec co-developed the 2 MW doubly fed induction wind turbine with SBW under a contract signed in late 2008. Under the terms of the agreement, SBW has the right to sell the 2 MW wind turbines globally.

“The magnitude of this electrical control system contract sends a strong signal that Shenyang Blower Works is positioned to be a key player in China’s vibrant wind power market,” said Greg Yurek, founder and chief executive officer of AMSC. “The company is planning to begin volume production later this year and sees significant long-term potential for this new line of business. AMSC expects to help every step of the way with its world-class wind turbine engineering, customer service and electrical control technologies and products.”

AMSC offers an array of proprietary technologies and solutions spanning the electric power infrastructure – from generation to delivery to end use. The company is a leader in alternative energy, providing proven, megawatt-scale wind turbine designs and electrical control systems. The company also offers a host of Smart Grid technologies for power grid operators that enhance the reliability, efficiency and capacity of the grid, and seamlessly integrate renewable energy sources into the power infrastructure. These include superconductor power cable systems, grid-level surge protectors and power electronics-based voltage stabilization systems. AMSC’s technologies are protected by a broad and deep intellectual property portfolio consisting of hundreds of patents and licenses worldwide. More information is available at http://www.amsc.com.

American Superconductor and design, Revolutionizing the Way the World Uses Electricity, AMSC, Powered by AMSC, D-VAR, dSVC, PowerModule, PQ-IVR, Secure Super Grids, Windtec and SuperGEAR are trademarks or registered trademarks of American Superconductor Corporation or its subsidiaries. All other brand names, product names or trademarks belong to their respective holders. The Windtec logo and design is a registered European Union Community Trademark.

Any statements in this release about future expectations, plans and prospects for the company, including our expectations regarding the future financial performance of the company and other statements containing the words “believes,” “anticipates,” “plans,” “expects,” “will” and similar expressions, constitute forward-looking statements within the meaning of the Private Securities Litigation Reform Act of 1995. There are a number of important factors that could cause actual results to differ materially from those indicated by such forward-looking statements. Such factors include: we have a history of operating losses, and we may incur losses in the future; a significant portion of our revenues are derived from a single customer, and a reduction in business with this customer could adversely affect our operating results; adverse changes in domestic and global economic conditions could adversely affect our operating results; changes in exchange rates could adversely affect our results from operations; our common stock may experience extreme market price and volume fluctuations, which may prevent our stockholders from selling our common stock at a profit and could lead to costly litigation against us that could divert our management’s attention; if we fail to implement our business strategy, our financial performance and our growth could be materially and adversely affected; we may not realize all of the sales expected from our backlog of orders and contracts; many of our revenue opportunities are dependent upon subcontractors and other business collaborators, and a reduction in orders stemming from these companies could adversely affect our operating results; our products face intense competition, which could limit our ability to acquire or retain customers; our success is dependent upon attracting and retaining qualified personnel and our inability to do so could significantly damage our business and prospects; and our international operations are subject to risks that we do not face in the U.S., which could have an adverse effect on our operating results. Reference is made to these and other factors discussed in the “Risk Factors” section of the company’s most recent quarterly or annual report filed with the Securities and Exchange Commission. In addition, any forward-looking statements included in this press release represent the company’s views as of the date of this release. While the company anticipates that subsequent events and developments may cause the company’s views to change, the company specifically disclaims any obligation to update these forward-looking statements. These forward-looking statements should not be relied upon as representing the company’s views as of any date subsequent to the date this press release is issued.