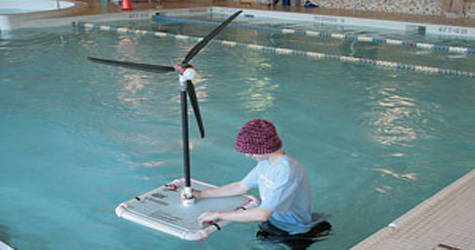 Orono, Maine —The University of Maine’s Advanced Structures and Composites Center and its partnerswill hold a launch celebration Friday, May 31 at 11 a.m. for VolturnUS 1:8, the first grid-connected offshore wind turbine to be deployed off the coast of North America.

The event will be hosted by Cianbro, 517 South Main Street, Brewer, Maine. Honored guests will include members of Maine’s Congressional delegation, the Director of Maine’s Office of Energy, representatives from theU.S.Department of Energy, Cianbro CEO Peter Vigue, and business and civic leaders. The highlight of the event will be a traditional launch of the vessel by Senator Susan M. Collins.

The approximately 65-foot-tall turbine prototype is 1:8th the scale of a 6 megawatt (MW), 423-foot rotor diameter design. It is the first floating turbine of its kind in the world, using advanced material systems with a unique floating hull and tower design. The program goal is to reduce the cost of offshore wind to compete with other forms of electricity generation with no subsidies.

Maine has 156 gigawatts (GW) of offshore wind capacity within 50 miles of its shores and a plan to deploy 5 GW of offshore wind by 2030. The 5 GW plan could potentially attract $20 billion of private investment to the state, creating thousands of jobs.

The VolturnUS technology is the culmination of more than five years of collaborative research and development conducted by the UMaine-led DeepCwind Consortium. The DeepCwind research program is a unique public-private partnership funded by the Department of Energy, the National Science Foundation-Partners for Innovation, the Maine Technology Institute, the state of Maine, the University of Maine and more than 30 industry partners.

Data acquired during the 2013 deployments off Castine and Monhegan will be used to optimize the design of UMaine’s patent-pending VolturnUS system.

The UMaine Composites Center has partnered with industry leaders to invest in a 12 MW, $96 million pilot farm. The deployments this summer will de-risk UMaine’s VolturnUS technology in preparation for connecting the first full-scale unit to the grid in 2016.