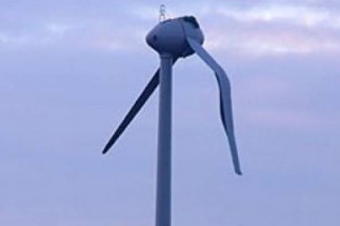 The £1 million wind turbine destroyed after mysterious glowing orbs were spotted in the sky was not hit by a UFO after all but broke due to mechanical failure, investigators have disclosed

A 65 ft blade that flew off the turbine came loose after bolts attaching it to the hub failed, not because of a collision, examination of the components has revealed.

Locals near the farm in Conisholme, Lincolnshire had reported seeing orange-yellow spheres trailing octopus-like “tentacles” on the night of the incident, sparking speculation that it had it had fallen victim to low-flying aliens.

But after weeks of analysis the turbine manufacturer Enercon has released an interim report identifying material fatigue as the cause of the accident.

They are now carrying out further tests to establish what caused the bolts to come loose, focusing on the blade and hub components to which they were attached. If one of these failed, the bolts could have been put under unbearable stress.

“The bolt failure was the effect not the cause of the problem. They have ruled out bolt fatigue and design problems, and we know that they were properly put on,” said Dale Vince the co-founder of Ecotricity, which owns the farm.

It was Mr Vince’s willingness to consider paranormal explanations that drew attention to the UFO theories, and he told the Telegraph he was disappointed by the results.

“To be honest I’m not surprised. But there was part of me that did hope it was a UFO as it was a lovely story,” he said.

“My favourite theory was that some alien race was trying to steal our turbine technology. They crossed galaxies to get here and when they arrive all they want is our wind technology. Wind power may be the holy grail of energy on Earth but not for stellar space travel.”

Fraser McLachlan of GCube, which insures more than 25,000 wind turbines, said at the time that a simple mechanical failure was the most likely explanation. “You get three or four cases of things like this a year. They are machines and machines are going to break,” he said.

Ecotricity plans to release the manufacturer’s full report into the accident when it is published in a few weeks. The damaged turbine was repaired within days of the accident at Enercon’s expense.

Other causes of the damage mooted at the time included aircraft, frozen urine dropped from a passenger jet and – least plausibly – collision with a flying cow.

Ecotricity has been exploiting the public interest in the incident with a special section on the its website, complete with a mock-up image of a cow hitting a turbine. “The coverage made what would have been a pretty unpleasant experience a lot lighter,” Mr Vince said.