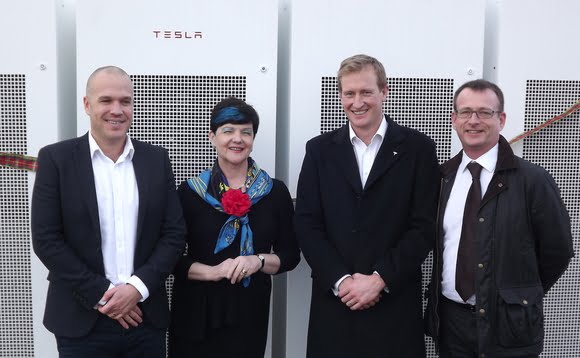 The first significant installation of Tesla ‘Powerpack’ batteries in Europe by Camborne Energy Storage was formally opened by Energy Minister, Baroness Neville Rolfe this morning on site in Somerset.

Storage technologies, like the Tesla Powerpack used in Somerset, have great potential to support electricity generated from renewable technology such as wind and solar farms. It does this by storing energy from these farms so they are able to supply generation on to the electricity network when the wind isn’t blowing or the sun isn’t shining. These new batteries located with a solar farm will allow enough clean, low carbon electricity to be delivered to the electricity network for 500 homes when it is needed.

New advances in technologies like batteries have the ability to offer solutions across the low carbon sector, from electric cars to smoothening electricity supply from intermittent energy sources like solar farms.

The Government aims to harness the potential of storage, and other flexible technologies to create a smart, efficient and productive electricity system, capable of delivering a low carbon energy future.

“Our upcoming industrial Strategy will build on this work further, working with businesses to ensure the UK continues to be at the forefront of low-carbon technology, creating the conditions for future success.”

New facilities like this reveal some of the significant economic opportunities for firms across the country bringing together climate, energy, business and industrial strategy.

On 10 November the Secretary of State Greg Clark set out his vision to see a smarter energy system through launching the ‘Smart Systems Call for Evidence’.

“Camborne is pleased to have developed Europe’s first Tesla grid scale installation by co-locating with a solar farm in Somerset, England. This project is already commercially operational providing low carbon power during times of high demand.

“Our first co-located site is an early step in the right direction, both for Camborne and for the industry and we look forward to continuing to deliver further low carbon power to the UK.”

The imperative to supply secure energy and deliver on the low carbon economy will underpin our industrial strategy. The government is encouraging industry to feed into this vision to help the UK transition from an outdated 20th Century energy system to a smart, clean system fit for the 21st Century.