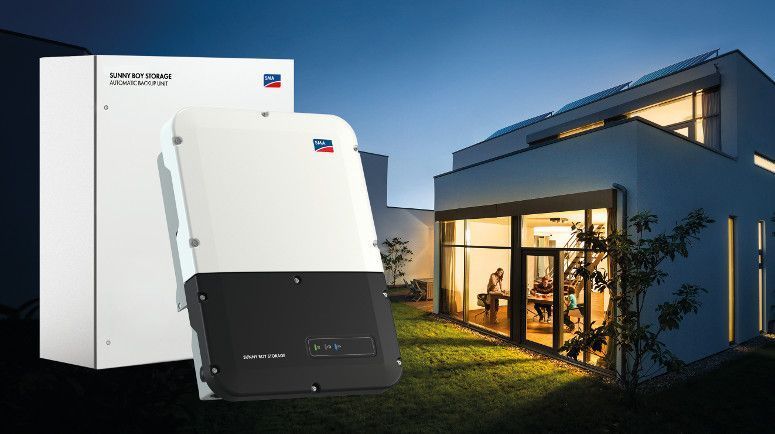 As energy storage becomes increasingly important, SMA is continuing to invest in its offerings and is now delivering the Sunny Boy Storage-US inverter and Automatic Backup Unit. While other manufacturers offer a simple transfer switch and a number of separate components that must be purchased, SMA provides a complete solution with all parts integrated into one fully automated backup solution.

“SMA’s Sunny Boy Storage with Automatic Backup Unit is a comprehensive solution that can supply whole home backup power in the event of a grid outage,” said Nick Morbach, Executive Vice President of SMA’s Residential and Commercial business unit. “This innovative solution provides a sense of security and peace of mind for homeowners, knowing they will have power when they need it most.”

The highly integrated Automatic Backup Unit consists of several components. The first is a 200 Amp rated contactor, which automatically disconnects the home energy system from grid power during a power outage. It then automatically reconnects the home energy system to the grid once it is safe to do so. Next, an autotransformer will balance up to 5 kVA of imbalance across phases, reducing the potential for system interruption during backup mode operation due to imbalanced loads within the home. The solution also includes built-in energy consumption metering with pre-installed current transformers, which will eliminate the need for additional hardware and labor. Two 50 Amp breakers are included for landing PV and energy storage inverter output, which also reduces hardware needs. Finally, the Automatic Backup Unit will feature an SMA backup controller, which manages and stabilizes the microgrid by monitoring solar generation, load consumption and battery state-of-charge.

SMA also offers a solution for backing up lighter household loads, which does not require the Automatic Backup Unit or any additional hardware. SMA’s Backup Lite is a manual transfer switch that can be configured to deliver up to 2,000 watts of continuous power during the day or night, offering homeowners a cost-effective solution and peace of mind in the event of a grid outage.

About SMA
The SMA Group with sales of around €900 million in 2017 is a global leader for solar inverters, a key component of all PV plants. SMA offers a wide range of products and solutions that allow for high energy yields for residential and commercial PV systems and large-scale PV power plants. To increase PV self-consumption efficiently, SMA system technology can easily be combined with different battery technologies. Intelligent energy management and digital energy solutions, comprehensive services and operational management of PV power plants round off SMA’s range. The company is headquartered in Niestetal, near Kassel, Germany, is represented in 19 countries and has more than 3,000 employees worldwide, including 500 working in Development. SMA’s multi-award-winning technology is protected by more than 1,200 patents and utility models. Since 2008, the Group’s parent company, SMA Solar Technology AG, has been listed on the Prime Standard of the Frankfurt Stock Exchange (S92) and is listed in the SDAX index.

Things keep moving in the Netherlands! 💨
We’re honored that we’ll service the wind turbines at 600-MW Gemini offshore wind park in the Dutch North Sea until 2036. The original 15-year long-term service program has been extended by another five years.