Ten months after becoming carbon neutral, the Science Based Targets initiative verifies that Siemens Gamesa’s emission reduction strategy is aligned with what climate science says is required to meet the 1.5°C trajectory. Siemens Gamesa joins a group of 430 other global organizations who have had their targets approved by the SBTi, where only about 150 have targets consistent with meeting the most ambitious 1.5°C scenario.

“With the transition to a low-carbon economy accelerating globally, setting emission reduction targets in line with climate science is the right way to future-proof the growth of our business. The verification of our targets by the SBTi confirms that we are on the right track towards our long-term goal of net zero emissions by 2050. However, urgency is needed and therefore, we have chosen to focus on short-term targets, to spur action now. I am confident that we will achieve these targets by engaging with suppliers and applying our own ingenuity and engineering capabilities,” said Gregorio Acero, Global Head of Quality Management & Health, Safety and Environment at Siemens Gamesa.

Siemens Gamesa committed to the SBTi as the first renewable energy manufacturer in September 2018 and reaffirmed its commitment to the initiative by becoming a signatory of the United Nation’s Business Ambition for 1.5°C campaign in the lead up to COP26 in December 2019.

Towards its 2050 net zero goal, Siemens Gamesa has set targets for the next five years towards 2025, which are:

Siemens Gamesa runs entirely on green electricity in Spain, Denmark, Germany and the United Kingdom – countries where the company has a strong manufacturing footprint. As the company’s manufacturing footprint is expanding globally, Siemens Gamesa is equally looking to supply renewable electricity in the remaining and future countries it operates in.

One synergy from switching to renewable electricity is that equipment used in Siemens Gamesa’s factories can be exchanged with equipment that runs on electricity to decarbonize the company’s manufacturing. For example, electric alternatives are substituted for material handling equipment, which prove to have economic benefits in addition to lowering the carbon footprint. More than 75% of that equipment has already been exchanged and is running on renewable electricity today.

With over 80% of the carbon footprint of Siemens Gamesa’s wind turbines occurring in its supply chain, the company acknowledges its responsibility in facilitating a green transition across the value chain by encouraging scope 3 emissions reductions, which extend beyond its direct control. First steps have already been taken to strengthen the collaboration with suppliers to achieve these targets, such as the launch of a supply chain development program in early 2019 aimed at increasing the collaboration with Siemens Gamesa’s tower suppliers, motivating those that might not have progressed as much in their decarbonization efforts as others, and in the end reducing the environmental impact of these suppliers.

“We are looking to engage more intentionally with our various supply chain actors around climate topics. By doing so – working with other business leaders who have made similar commitments – we can find solutions that minimize climate change as well as encourage other corporate citizens to make the bold commitments that are necessary to move the world toward a carbon-free future,” said Dietmar Dresp, CPO of Siemens Gamesa.

Collaboration is key across the value chain: Siemens Gamesa is actively working on finding solutions for pressing industry issues such as the decommissioning of wind turbines and the recycling of components with its suppliers, customers, competitors, industry associations, and research institutions. An iterative approach based on strong cooperation will create the scale of change necessary to mitigate climate change and its impacts.

“We congratulate Siemens Gamesa for setting emission reduction targets consistent with limiting warming to 1.5°C, the most ambitious goal of the Paris Agreement,” said Alberto Carillo Pineda, Director of Science Based Targets at CDP, one of the Science Based Targets initiative partners. “As a leader in their sector, Siemens Gamesa’s actions will raise the bar for ambition in the industry and help their customers reduce their own emissions.” 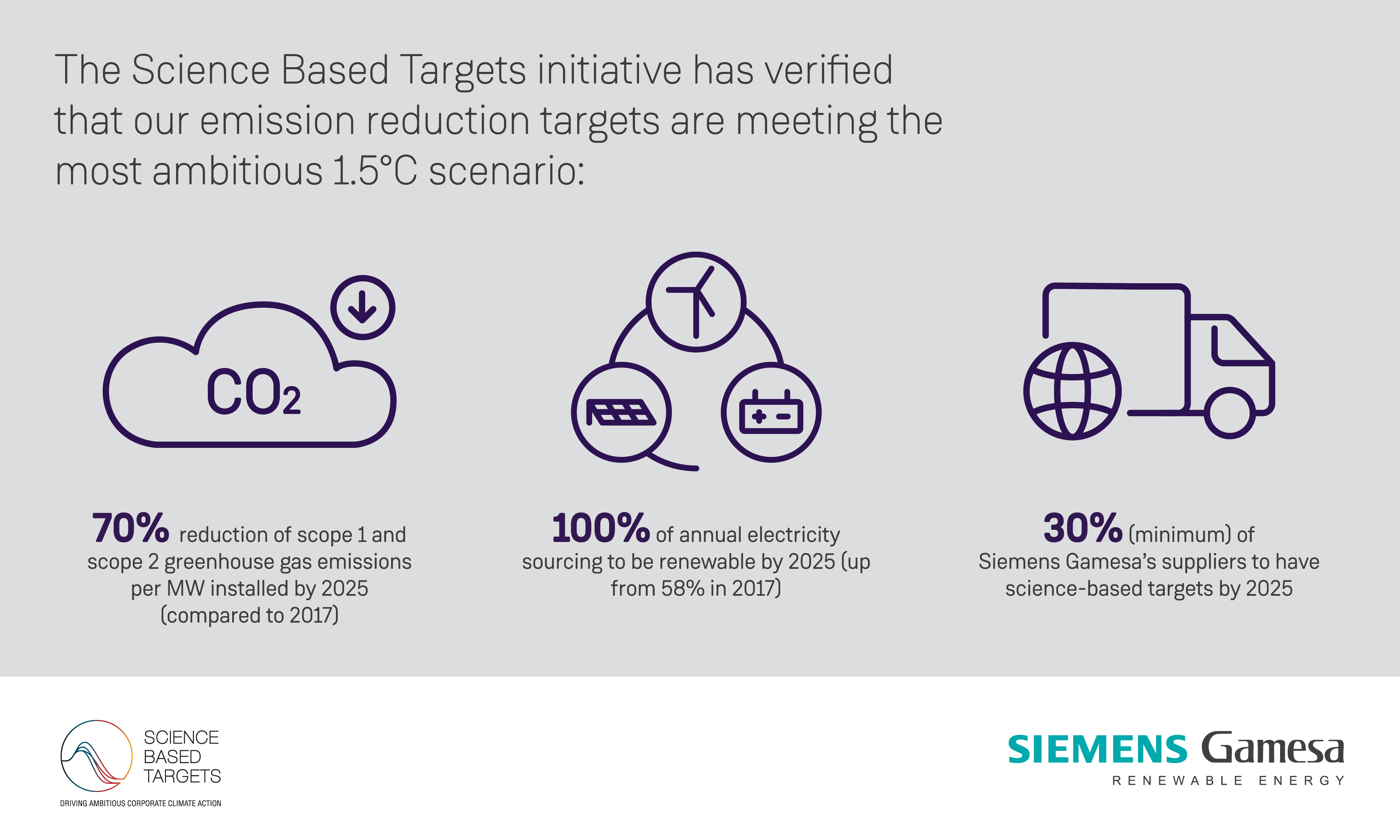 World Of Renewables is the World's #1 renewable energy network and home to The World Renewable Energy Association (WoREA) with over 600,000 registered members

How to save money on clothes: Top tips to help you get a stylish new wardrobe without the designer budget - https://staging.worldofrenewables.com/how-to-save-money-on-clothes-top-tips-to-help-you-get-a-stylish-new-wardrobe-without-the-designer-budget-2/ @WoRenewables