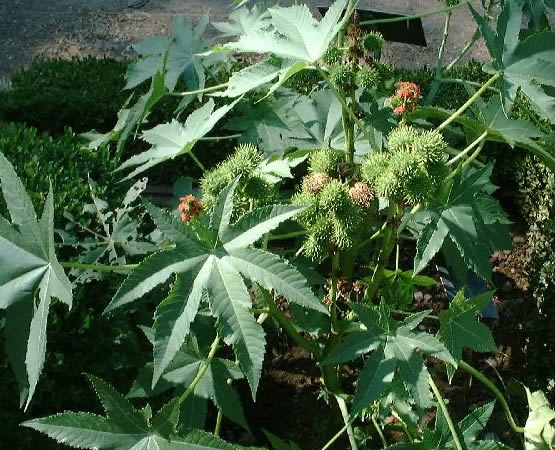 The castor bean, a tropical perennial shrub found in Africa and other tropical and subtropical regions in the world, is a member of the Euphorbiaceae family.

A research team co-led by scientists from the J. Craig Venter Institute (JCVI) and the Institute for Genome Sciences (IGS), University of Maryland School of Medicine, today published the sequence and analysis of the castor bean (Ricinus communis) genome in Nature Biotechnology. Agnes P. Chan, Ph.D., JCVI, and Jonathan Crabtree, Ph.D., IGS were co-lead authors on the paper describing the 4.5X coverage of this important oilseed crop. The availability of the castor bean genome also has important biodefense implications since the plant produces the powerful toxin, ricin.

The castor bean, a tropical perennial shrub found in Africa and other tropical and subtropical regions in the world, is a member of the Euphorbiaceae family. There are approximately 6,300 species in this family that includes the cassava, rubber tree, ornamental poinsettias and jatropha. While the castor bean genome is the first to be sequenced and published from this family, the jatropha genome has been sequenced by JCVI and the company Synthetic Genomics Inc. Jatropha is also an oilseed crop.

The sequencing of the castor bean genome to 4.5 X coverage was conducted at JCVI. The results of this work show that the genome is 350 Mb and has an estimated 31,237 genes. Because of the potential use of castor bean as a biofuel and its production of the potent toxin ricin, the team focused efforts on genes related to oil and ricin production. They analyzed important metabolic pathways and regulatory genes involved in the production and storage of oils in the castor bean. The analyses could be important for comparative studies with other oilseed crops, and could also allow for genetic engineering of castor bean to produce oil without ricin.

Identifying and understanding the ricin–producing gene family in castor bean will be important in preventing and dealing with potential bioterrorism events. Genomics enables enhanced diagnostic and forensic methods for the detection of ricin and precise identification of strains and geographical origins. The team discovered that the ricin gene family was larger than previously thought, and they revealed approximately 28 genes in the ricin producing family. As a next step, the group suggest further comparative genomic studies with the close relative cassava, a major crop in the developing world, to further elucidate their disease resistance aspects.

Dr. Chan stated, “The availability of the castor bean genome will encourage more research into the positive aspects of this oilseed crop as a potential biofuel. Further study will also elucidate many aspects about ricin and enable researchers to potentially eliminate the bioterrorism threat of this natural toxin.”

This research was funded through a contract from the National Institute of Allergy and Infectious Diseases (NIAID), National Institutes of Health, Department of Health and Human Services; a Federal Bureau of Investigation grant; and a National Science Foundation grant DBI 0701919 to EBC.

About the J. Craig Venter Institute

The JCVI is a not-for-profit research institute in Rockville, MD and La Jolla, CA dedicated to the advancement of the science of genomics; the understanding of its implications for society; and communication of those results to the scientific community, the public, and policymakers. Founded by J. Craig Venter, Ph.D., the JCVI is home to approximately 400 scientists and staff with expertise in human and evolutionary biology, genetics, bioinformatics/informatics, information technology, high-throughput DNA sequencing, genomic and environmental policy research, and public education in science and science policy. The legacy organizations of the JCVI are: The Institute for Genomic Research (TIGR), The Center for the Advancement of Genomics (TCAG), the Institute for Biological Energy Alternatives (IBEA), the Joint Technology Center (JTC), and the J. Craig Venter Science Foundation. The JCVI is a 501 (c) (3) organization. For additional information, please visit http://www.JCVI.org.